Background screening is an expectation of anyone who is looking for employment.  You know that part of your hiring or onboarding process will include your signature on multiple forms which allow your employer to dig around in your recorded history for any red flags.  Potential employees sign away blithely because 1) almost every company is doing this and 2) so much of peoples’ lives is available online it seems more of a courtesy to give permission to access legal records.  This second part raises an interesting question: should a person’s social media presence be up for grabs when it comes to employee background screening?

Millennials in the Workforce

Social media screening according to shrm.org and hrexecutive.com are trending in 2019.  These two pieces will be referenced throughout this article.  This trend is unsurprising, especially to the millennials who are starting to take over the workforce.   Facebook and MySpace became available in the coming-of-age years through mid-twenties of this generation.  The growth and expansion of social media into Twitter, Instagram, and countless other platforms means millennials have had the majority of their lifespan on display.

Social media has exposed treachery in all age groups, though, and it continues daily.  What’s more, your social media embarrassments of ten years ago don’t stay buried.  If you’re found guilty in the public sphere it will continue to haunt you later in life, no matter what changes you’ve made or growth you’ve shown.  Because of how we consume social media it would seem that horrible thing you said yesterday is already so deep in the feed it will never resurface, but if companies go digging, all of your silly comments, photos, and reposted articles are on the table for scrutiny.

How This Trend Impacts the Companies Conducting It

With this in mind, social media screening becomes troubling for the individual.  However, companies need to be careful if they choose to go down this road.   Social media screening is, as noted, trending, and though more background screening companies are adding it to their repertoire, it’s not standardized.  If companies try to conduct social media screening on their own, they could end up in a world of hurt with discrimination lawsuits.  Because there isn’t a recognized set of practices around social media screening employers can also get in too deep, finding out much more about one of their employees than they ever needed.  Feeling awkward interacting with your employees at work is far less impactful than a lawsuit, but it can quickly lead back to discrimination: you end up not promoting someone because of their “at home” persona and not because their work was less impressive. 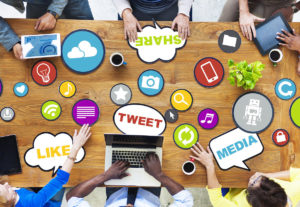 According to hrexecutive.com a majority of those companies that screen their employees’ social media usage throughout their employment screen every employee no matter their job title, and more companies are considering adding it.  The idea behind this is a company’s risk doesn’t go down once the candidate is hired – if anything, it increases.

Companies are worried their employees may be representing their brand with embarrassing behavior and illegal activity.  This is a valid concern but going down the social media rabbit hole can end up in your employer finding out strange things about you out of context of who you are today.

According to a SHRM post about learning “too much information” on a current or prospective employee.  They state that gaining too much information, or TMI, can open you up for a lawsuit.  When a company decides to conduct its own social media screening – essentially going online and finding what there is to find in the public sphere on a candidate or current employee – you can’t unlearn what you’ve found out about the person.

The information may have nothing to do with their job or be illegal, but maybe you don’t agree with their point of view.  This information is now affecting your decision when it comes to a raise or promotion and could lead to discrimination lawsuits if the employee were to find out.  Not only that but it’s unethical.  Risk can be mitigated when screening social media if you have a third party scrub the post and present only relative employment decision factors.  Each company implementing this should have legal counsel help create a policy.

The Fair Credit Reporting Act (FCRA) and the Equal Employment Opportunity Commission (EEOC) are both in place to impede workplace discrimination.  The EEOC enforces Title VII of the 1964 Civil Rights Act which “prohibits employment discrimination based on race, color, religion, sex and national origin.” Title VII has been further amended to cover the Americans with Disabilities act as well.  Conducting Social Media screening, especially without a third party, can easily violate the laws put in place by both of these institutions.  If a potential employee feels they were discriminated against because of something found in their social media profiles that fall under these protections, it could be grounds for a lawsuit.

Can Social Media Screening Be Legal and Beneficial?

Though social media screening is merely trending in 2019, many people have understood its influence in the workplace for years.  Depending on your career objectives a person’s Facebook will have their full employment history on their profile and anything untoward is protected with a privacy setting or not posted at all.  So how can employers take advantage of social media’s value while maintaining legal boundaries?  By using third party screening like CNet Technologies, companies can gain social media reports that omit any protected facets of their candidates’ lives.   As of right now, many employees have to sign an employee code of conduct that prohibits certain postings about their company on social media.  It isn’t far-fetched then to believe a social media report will be handled like any other employee background check: just another disclosure to sign that allows a regulated report to be pulled on your social media activity.